Welcome to the Fess Parker Fan Page! Fess Elisha Parker, Jr. (August 16, 1924 – March 18, 2010) was an American film and television actor known for his 1950s portrayals of Davy Crockett and Daniel Boone. He starred in many other movies and was also known as a wine maker and resort owner.

Actor Fess Parker of Santa Barbara, California has been called by some an American icon. His portrayal of frontiersmen Davy Crockett and Daniel Boone impacted millions of young viewers in the late 1950's and 60's.

Originally from Texas, Parker enrolled at the University of Texas where he graduated in 1950 with a degree in history. Moving to California, he completed academic work on his Masters degree in drama at the University of Southern California. Parker began acting professionally in 1951 as a stage performer in the national company of Mister Roberts. In 1954, Walt Disney signed Parker to play the title role in Davy Crockett, King of the Wild Frontier.

In 1964 Parker began filming his network television series, Daniel Boone. During six years as one of the highest rated shows of its time, Parker not only starred in the series but co-produced it and directed five of its most popular episodes. Parker continued to star in numerous box office hits for Disney, Paramount and Warner Brothers' Studios, while laying the foundation for his second career as real estate developer.

Born in Fort Worth, TX and raised in San Angelo, Fess served in the United States Navy during WWII and then returned home to Texas to graduate from the University of Texas-Austin in 1950. He was honored as a distinguished alum of the university in 1969.

A desire to act took Fess to California in the early 50's where hard work and great good fortune led him to be cast in Walt Disney's "Davy Crockett, King of the Wild Frontier" co-starring the late Buddy Ebsen. While under personal contract to Walt Disney, Fess made numerous pictures for the studio including the prequel "Davy Crockett and the River Boat Pirates" as well as The Great Locomotive Chase" and "Smoky."


The early 70's found Fess eager to explore the business world as a real estate developer in Santa Barbara, CA. After successfully opening three high end mobile home parks the 360 room Fess Parker Doubletree Resort opened in 1985. It is one of the most successful hotels on the Santa Barbara waterfront. A 150 room luxury hotel is also in the final stages of planning on an adjacent piece of beach front property.


In 1989 Fess and his family turned an interest in fine wine into an adventure now 20 years in the making. The Fess Parker Winery is a highly regarded and popular destination on the Foxen Canyon wine trail in Los Olivos, CA. The family also farms over 300 acres of vineyard in the Santa Ynez valley. Creating a successful business with his family was one of Fess' proudest achievements.

Fess and his wife Marcella celebrated their 50th wedding anniversary in January of 2010. Their son Eli and daughter Ashley, as well as 11 grandchildren and one great grandchild spent a great deal of time with Fess in his final months and weeks.

It should be said that Fess was always extremely grateful to his long time fans for their continued support and friendship over the years.

The Fess Parker Fanpage will periodically post pictures, videos and stories that are intended to delight fans of the page. This may involve pictures & info of fans taken from the Internet. Fans of this page agree to this form of entertainment and humor. Please remove yourself if you do not wish to participate in the rules of this page. Thanks.

We'll be periodically updating functionality on our website at fessfans.com This blog will allow users who enter their email address to post comments & receive notifications. We follow all privacy policies as outlined by Google and never ask for money of any kind. If people would like to provide something in Fess Parker's memory, his children suggest a donation to Direct Relief International as the non-profit that was chosen www.directrelief.org. Bear with us as we get started. Input is always welcome.

We hope you enjoy this new site and thanks for your ongoing support.


P.S. There are now four different ways you can remain a Fess Friend, which include:

1) FessFans.com: Subscribe via your email there OR just visit the site

The Fess Parker Fan Page is the result of numerous web & social media sites coming together to honor a man we all admire. We are a group of fans who think that Fess Parker deserves a website. We miss him, but his legend lives on!

Historically, there were numerous websites & social media platforms dedicated to Fess. Special thanks to Karen Dusik who originally started the Daniel Boone TV website. She also had the help of others including Marla, Lis, Deanie, Kat, Art, Tom, Derek, Lo, Clark, Sir Sean, Karen M-G, Rodolfo, and Susie for their information and encouragement. There's superfan Mike, who represented us all well on the DVDs. There's our Boone Buddy Dan who knows just about everyone associated with the show! We appreciate all our Fess Friends around the world too.

These sites are under the direction of Donnie Adams (& his family), an avid Fess Parker fan who currently lives in Cincinnati, Ohio, just a few minutes from Boone County, Kentucky! He holds two degrees from Purdue University's School of Technology and enjoys the hobby of these sites in his spare time.  Check out this BLOG, as well as the Twitter, Facebook & danielboonetv.com & darbyhinton.com websites that are all dedicated to Fess Parker.

Thank you to all of our Fess Friends, especially those that go above and beyond the call of duty to help. Hope you enjoy this page and please leave a comment on any of the social media sites, including our BLOG here.

"Thank you for your support!" - Donnie Adams & family 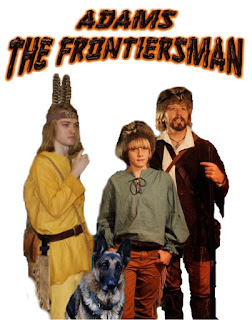 "Copyright Disclaimer Under Section 107 of the Copyright Act 1976, allowance is made for "fair use" for purposes such as criticism, comment, teaching, and research. Fair use is a use permitted by copyright statute that might otherwise be infringing. Educational tips the balance in favor of fair use"  The materials on this website are posted under the 'fair use' act.
Posted by Fess Parker Fans & Friends at 9:39 AM