TBT: When did you first watch Disney's Davy Crockett? 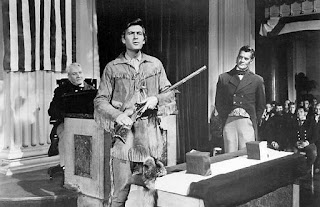 Davy Crockett is a five-part serial which aired on ABC from 1954–1955 in one-hour episodes, on the Disneyland series. The series stars Fess Parker as real-life frontiersman Davy Crockett and Buddy Ebsen as his friend, George Russel.

The first three episodes of the serial were edited together as the theatrical film Davy Crockett, King of the Wild Frontier (1955) and rebroadcast in color in the 1960s, when the Disney program went to NBC. This series and film are known for the catchy theme song, "The Ballad of Davy Crockett". It was filmed in color at the Great Smoky Mountains National Park at the Mountain Farm Museum adjacent to the visitor center at Oconaluftee, near Qualla Reservation's entrance and Janss Conejo Ranch, California.

The final two episodes were edited together as the theatrical film Davy Crockett and the River Pirates (1956). It was filmed in Cave-In-Rock, Illinois. 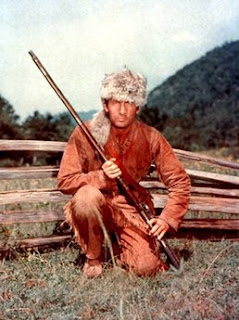 The Walt Disney Company acknowledged that the broad public popularity of the first three segments came as a surprise, but Disney capitalized on its success by licensing the sale of various types of Crockett paraphernalia, including coonskin caps and bubble gum cards. In his Archive of American Television interview, Fess Parker noted that his contract called for a percentage of the merchandising sales from Disney's company but that this was voided by his contract being with Walt Disney personally rather than the company itself, costing him millions of dollars from the runaway bonanza of Crockett merchandising.

After the Crockett mini-series, Disney attempted to create other heroic characters, such as six episodes of The Saga of Andy Burnett (1957), starring Jerome Courtland as a pioneer who traveled from Pittsburgh, Pennsylvania to the Rocky Mountains. The Nine Lives of Elfego Baca followed in 1958, with Robert Loggia as New Mexico lawman Elfego Baca. Some thirteen segments of Texas John Slaughter aired in 1958–1959, based on real-life law enforcement officer John Horton Slaughter of Texas and starring Tom Tryon. Another Disney mini-series, The Swamp Fox, starred Leslie Nielsen as American Revolutionary War fighter Francis Marion, and aired between 1959 and 1961. Marion wore a foxtail on his three-cornered hat, but the headpiece failed to attract the same level of attention as the Crockett coonskin caps attained.

The shows were repeated on NBC in the 1960s after Disney had moved his program to that network. The 1960 repeats marked the first time that the programs had actually been shown in color on TV. Davy Crockett made a return with Disney in two further adventures: Davy Crockett's Keelboat Race and Davy Crockett and the River Pirates. In these two episodes, Crockett faces off against Mike Fink, another early American legend. A three-episode 1988–89 revival was made entitled
Posted by Caring Dad at 4:46 AM