Here's a Saturday Sing-Along for you.

Have you heard all these verses to The Ballad of Davy Crockett theme song? 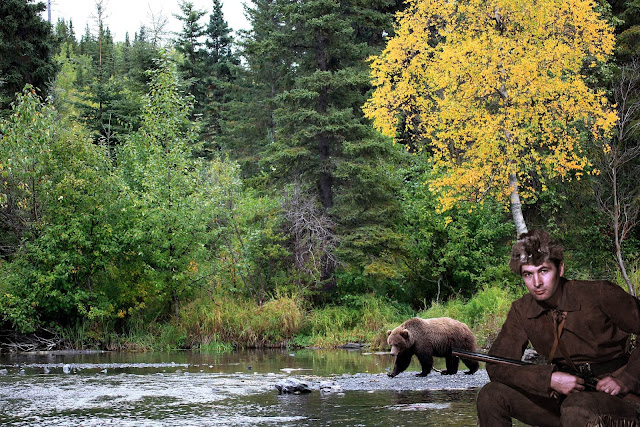 Born on a mountain top in Tennessee,
greenest state in the land of the free
Raised in the woods so's he knew ev'ry tree,
kilt him a b'ar when he was only three
Davy, Davy Crockett, king of the wild frontier!
In eighteen thirteen the Creeks uprose,
addin' redskin arrows to the country's woes
Now, Injun fightin' is somethin' he knows,
so he shoulders his rifle an' off he goes
Davy, Davy Crockett, the man who don't know fear!
Off through the woods he's a marchin' along,
makin' up yarns an' a singin' a song
Itchin' fer fightin' an' rightin' a wrong,
he's ringy as a b'ar an' twic't as strong
Davy, Davy Crockett, the buckskin buccaneer!
Andy Jackson is our gen'ral's name,
his reg'lar soldiers we'll put to shame
Them redskin varmints us Volunteers'll tame,
'cause we got the guns with the sure-fire aim
Davy, Davy Crockett, the champion of us all!
Headed back to war from the ol' home place,
but Red Stick was leadin' a merry chase
Fightin' an' burnin' at a devil's pace,
south to the swamps on the Florida Trace
Davy, Davy Crockett, trackin' the redskins down!
Fought single-handed through the Injun War,
till the Creeks was whipped an' peace was in store
An' while he was handlin' this risky chore,
made hisself a legend for evermore
Davy, Davy Crockett, king of the wild frontier!
He give his word an' he give his hand,
that his Injun friends could keep their land
An' the rest of his life he took the stand,
that justice was due every redskin band
Davy, Davy Crockett, holdin' his promise dear!
Home fer the winter with his family,
happy as squirrels in the ol' gum tree
Bein' the father he wanted to be,
close to his boys as the pod an' the pea
Davy, Davy Crockett, holdin' his young'uns dear!
But the ice went out an' the warm winds came,
an' the meltin' snow showed tracks of game
An' the flowers of Spring filled the woods with flame,
an' all of a sudden life got too tame
Davy, Davy Crockett, headin' on West again!
Off through the woods we're ridin' along,
makin' up yarns an' singin' a song
He's ringy as a b'ar an' twict as strong,
an' knows he's right 'cause he ain' often wrong
Davy, Davy Crockett, the man who don't know fear!
Lookin' fer a place where the air smells clean,
where the trees is tall an' the grass is green
Where the fish is fat in an untouched stream,
an' the teemin' woods is a hunter's dream
Davy, Davy Crockett, lookin' fer Paradise!
Now he's lost his love an' his grief was gall,
in his heart he wanted to leave it all
An' lose himself in the forests tall,
but he answered instead his country's call
Davy, Davy Crockett, beginnin' his campaign!
Needin' his help they didn't vote blind,
They put in Davy 'cause he was their kind
Sent up to Nashville the best they could find,
a fightin' spirit an' a thinkin' mind
Davy, Davy Crockett, choice of the whole frontier!
The votes were counted an' he won hands down,
so they sent him off to Washin'ton town
With his best dress suit still his buckskins brown,
a livin' legend of growin' renown
Davy, Davy Crockett, the Canebrake Congressman!
He went off to Congress an' served a spell,
fixin' up the Govern'ments an' laws as well
Took over Washin'ton so we heered tell,
an' patched up the crack in the Liberty Bell
Davy, Davy Crockett, seein' his duty clear!
Him an' his jokes travelled all through the land,
an' his speeches made him friends to beat the band
His politickin' was their favorite brand,
an' everyone wanted to shake his hand
Davy, Davy Crockett, helpin' his legend grow!
He knew when he spoke he sounded the knell,
of his hopes for White House an' fame as well
But he spoke out strong so hist'ry books tell,
an' patched up the crack in the Liberty Bell
Davy, Davy Crockett, seein' his duty clear!
When he come home his politickin' done,
the western march had just begun
So he packed his gear an' his trusty gun,
an' lit out grinnin' to follow the sun
Davy, Davy Crockett, leadin' the pioneer!
He heard of Houston an' Austin so,
to the Texas plains he jest had to go
Where freedom was fightin' another foe,
an' they needed him at the Alamo
Davy, Davy Crockett, the man who don't know fear!
His land is biggest an' his land is best,
from grassy plains to the mountain crest
He's ahead of us all meetin' the test,
followin' his legend into the West
Davy, Davy Crockett, king of the wild frontier!
Posted by Caring Dad at 3:28 AM No comments: