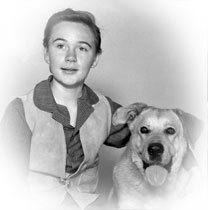 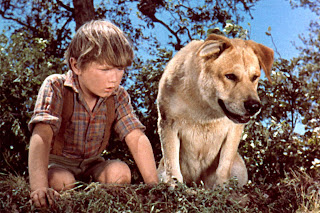 “Old Yeller” was the Disney debut of actors Tommy Kirk and Kevin Corcoran.   They later went on to appear in The Swiss Family Robinson and The Shaggy Dog as well as a few others throughout their careers. 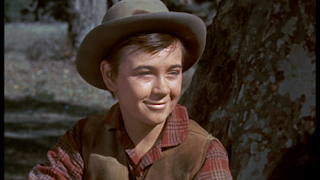 The “wolf” was really a German Shepherd with some clever make-up.
Both dogs were taught how to play-fight to achieve the scariest results. Don’t worry; both dogs were muzzled during those interactions to avoid any accidental nips. 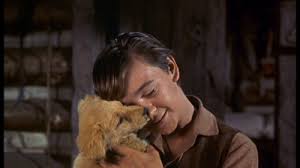 You can hear Old Yeller Growl if you listen closely during Lady and the Tramp.
Well, it’s the same growling noise, anyway. It is not unusual for movie houses to use sounds in more than one movie. You can hear the same Old Yeller Grown in both of those classic films. 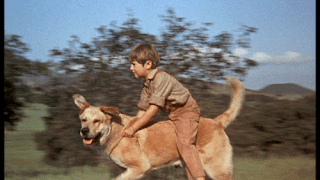 The dog that played Old Yeller was really named Spike. On top of doing this movie, Spike also appeared alongside Maria English in a movie called She-Creature. 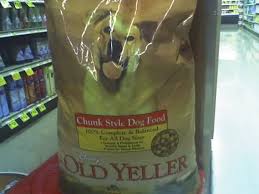 Did you ever buy the Old Yeller dog food they once sold?

In 1860s post-American Civil War Texas, Jim Coates leaves home to work on a cattle drive, leaving behind his wife Katie, older son Travis and younger son Arliss.
While Jim is away, Travis sets off to work in the cornfield, where he encounters a dog named "Old Yeller", a golden retiever mix. He was called that because "yeller" is a dialectpronunciation of yellow and the fact that his bark sounds more like a human yell. Travis unsuccessfully tries to drive the dog away, but Arliss likes him and defends him from Travis. However, the dog's habit of stealing meat from smokehouses and robbing hens' nests does not endear him to Travis.
Later, Arliss tries to capture a black bear cub by feeding it cornbread and grabbing it. Its angry mother hears her cub wailing and attacks, but Old Yeller appears and drives her off, earning the affection of the family. Travis grows to love and respect Old Yeller, who comes to have a profound effect on the boy's life.
Old Yeller's owner, Burn Sanderson, shows up looking for his dog, but comes to realize that they need him more than he does, and agrees to trade him to Arliss in exchange for a horny toad and a home-cooked meal. Sanderson takes Travis aside and warns him of the growing plague, hydrophobia.
One day, Travis sets out to trap feral hogs. On the advice of Bud Searcy, he sits in a tree, trying to rope them from above as Old Yeller keeps them from escaping. Travis falls into the group of hogs, one of which injures him. Old Yeller attacks it and rescues Travis, who escapes with a badly hurt leg. Old Yeller is seriously wounded as well. Searcy warns them of hydrophobia in the area and is chastised by Mama for trying to scare Travis. The boars did not have hydrophobia, and both Travis and Old Yeller fully recover.
However, the family soon realize that their cow, Rose, has not been allowing her calf to feed and may have rabies. Watching her stumble about, Travis confirms it and shoots her. While Katie and Lisbeth Searcy burn the body that night, a rabid wolf attacks. Old Yeller defends the family, but he is bitten in the struggle before Travis can shoot and kill the wolf with the rifle. They pen Old Yeller in the corn crib for several weeks to watch him. Soon when Travis goes to feed him, he growls and snarls at him. After he nearly attacks Arliss, who, not understanding the danger, had attempted to open the corn crib, a grieving Travis is forced to shoot him. In doing so, he takes his first step toward adulthood.
Heartbroken from the death of his beloved dog, Travis refuses the offer of a new puppy fathered by Old Yeller. Jim comes home with a bagful of money and presents for his family. Having learned about Old Yeller's fate from Mama, he explains the facts about life and death to Travis. When they get back to the farm, the young puppy steals a piece of meat, a trick he learned from his father. Travis adopts him, naming him "Young Yeller" in honor of his father.

Posted by Caring Dad at 8:22 AM No comments: 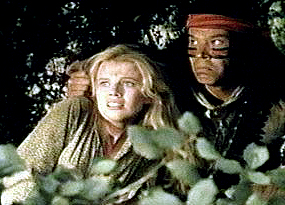 Yes that's Pat Hogan (a.k.a. Chief Redstick from the Disney Davy Crockett series) in 'Savage Sam', the sequel to 'Old Yeller'. In the story, the dog is the son of Old Yeller. Have you seen 'Savage Sam'? ;-)
Posted by Caring Dad at 8:14 AM No comments: 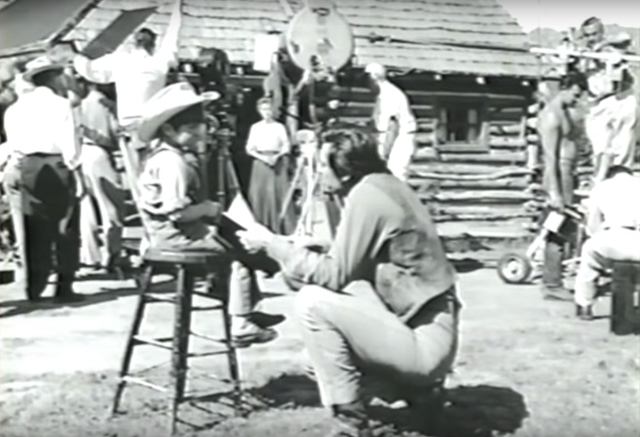 Old Yeller was a name that had two meanings. First, it stood for the yellow coat the dog had, but it also represented the sound that came from the dog. Instead of a bark, it sounded more like a yell. Here's a picture of Fess Parker with 'Arliss' on the set of Old Yeller. 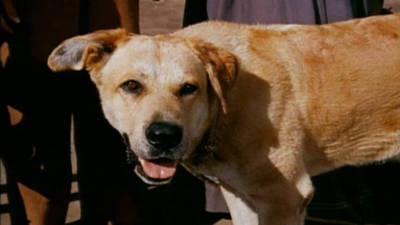 
Jim Coates (Fess Parker) gives some fatherly advice. "Don't waste the good part frettin' about the bad. That makes it all bad. If you look around for something good to take the place of the bad, you'll generally find it."
Posted by Caring Dad at 7:49 AM No comments: 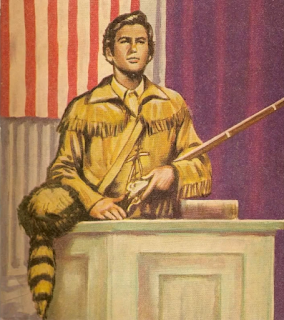 Posted by Caring Dad at 7:41 AM No comments:

Back in high school

Posted by Caring Dad at 7:31 AM No comments:

Make the most of what you have and learn to be happy with simple pleasures. 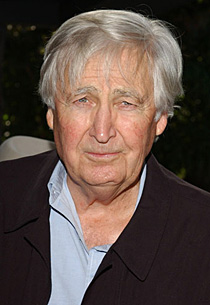 Posted by Caring Dad at 7:28 AM No comments: