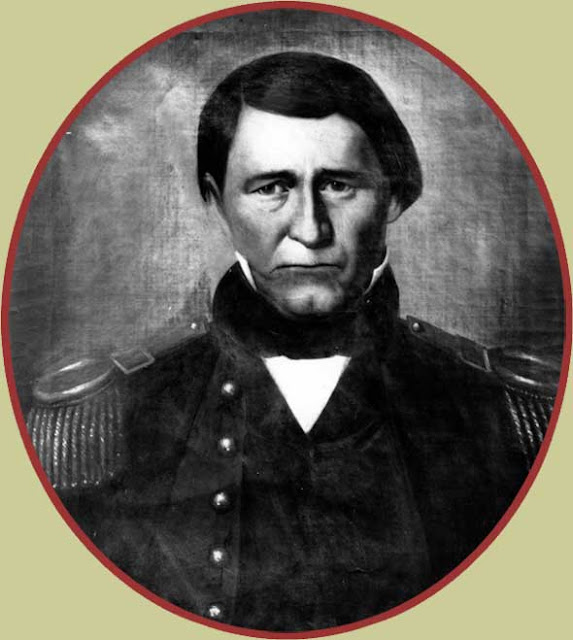 Nathan Boone (1780–1857) was a veteran of the War of 1812, a delegate to the Missouri constitutional convention in 1820, and a captain in the 1st United States Regiment of Dragoons at the time of its founding, eventually rising to the rank of lieutenant colonel. Nathan was the youngest son of Daniel Boone.
Nathan Boone was born at Boone Station, near Athens, Fayette County, Kentucky in 1780 and moved to Spanish Missouri with the family in 1799. In 1807 he and his brother Daniel first worked the Salt licks in what became known as the Booneslick Country. The brothers built the Boone's Lick Road, which became a major overland route in early Missouri.

Miamis surrendering to Dodge. Painting is in the Missouri capitol.
Boone took part in the War of 1812 as captain of a company of rangers which scouted in the country between the Mississippi and Illinois. He also took part in an expedition led by Henry Dodge to relieve settlers who had been raided by Miami Indians. He and Dodge saved 150 Miamis from massacre by members of their own militia. The Miamis had agreed to surrender as prisoners of war, and certain members of the militia became angered when they found contraband belonging to a settler who had been killed in the original raid, but Dodge and Boone literally stood in the line of fire and forced the nearly mutinous troops to back down. He attained the rank of major in the militia in this war.
After he was mustered out Boone retired to his farm in St. Charles County, Missouri. He built the first stone house north of the Missouri and his father died there. In 1820 he was a delegate to the Missouri constitutional convention
He participated in the Black Hawk War in 1832. After the conclusion of those hostilities, he entered the regular army as captain in the United States Regiment of Dragoons, direct predecessor of the 1st Cavalry Regiment (United States Army), the regiment's first commander being Colonel Dodge. He participated in the First Dragoon Expedition, notable for making the first contact between the United States federal government and the southern plains Indians. His army service further included participation in the Second Dragoon Expedition, surveying the boundaries between the Creek and Cherokee Indian nations, and leading his own expedition into the southwestern plains in 1843. In 1847 was made major in the army, and lieutenant-colonel in 1853. In 1853, Nathan Boone resigned and retired to his home in Missouri, Greene County, Missouri, where he died in 1857.
In the fall of 1851, Nathan Boone and his wife Olive were interviewed by Wisconsin Historical Society archivist Lyman C. Draper concerning his famous father. Along with the interviews, Boone presented Draper with a collection of family papers. Draper wrote a manuscript about Daniel Boone which was finally published as an edited and annotated version in 1998. 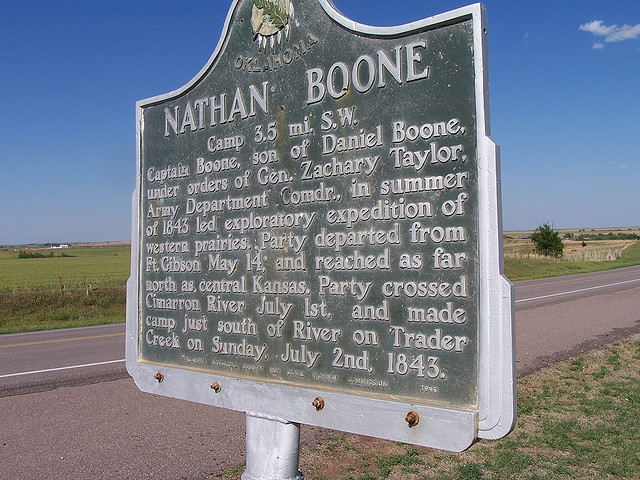 Posted by Fess Parker Fans & Friends at 8:32 AM