The best kind of love is one that makes us reach for more. 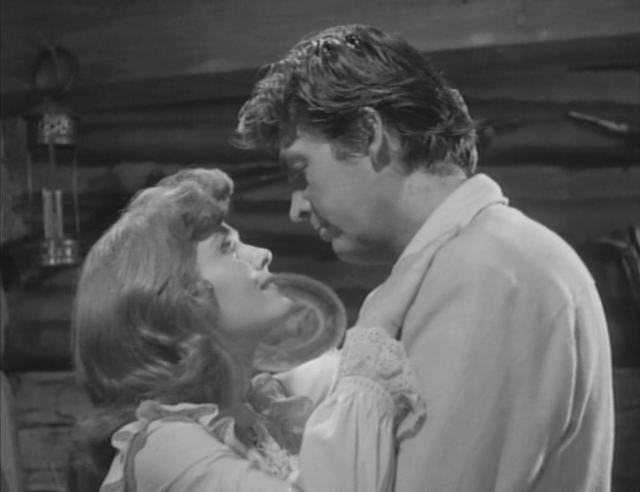 Daniel and Rebecca
Posted by Fess Parker Fans & Friends at 5:29 PM No comments:

Mingo - The Man With The Bullwhip 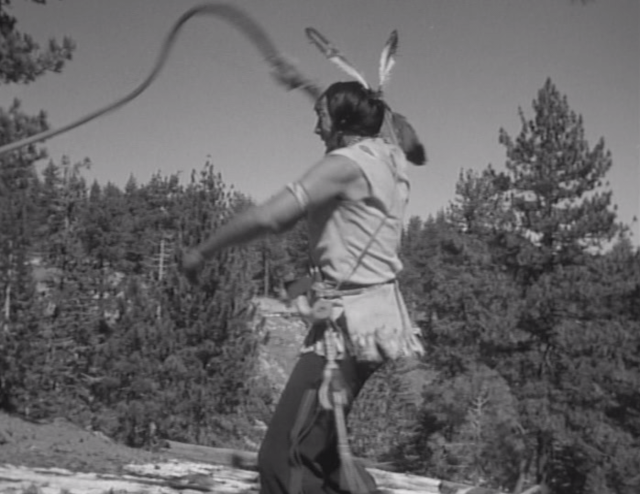 Posted by Fess Parker Fans & Friends at 5:26 PM No comments:

The Polly Crockett hat marketed to girls back in the day. 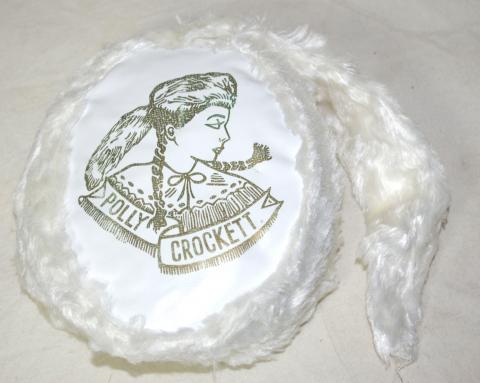 Posted by Fess Parker Fans & Friends at 1:00 PM No comments:

Ridin' the Spirit of Davy Crockett 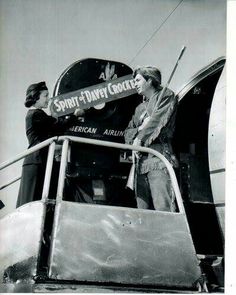 Posted by Fess Parker Fans & Friends at 6:00 AM No comments:

Watch out! There's that look from Ma. 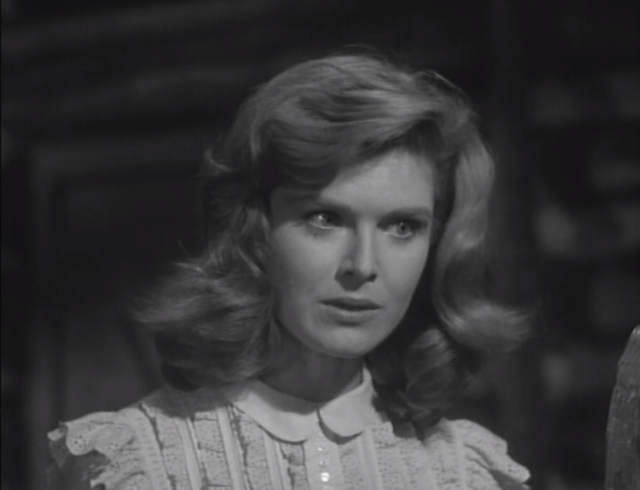 Posted by Fess Parker Fans & Friends at 4:49 AM No comments:

Doubt kills more dreams than failure ever will. 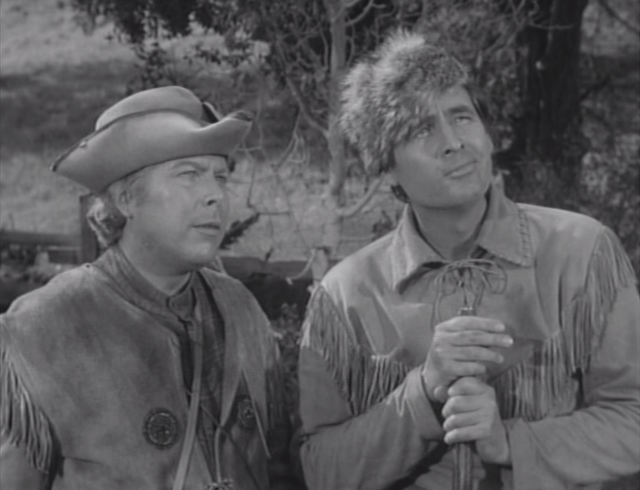 Dan'l and Yadkin thinking about a settlement in Kentucke.
Posted by Fess Parker Fans & Friends at 4:48 AM No comments:

DID YOU KNOW: Old Betsy was named after Davy Crockett's sister. Read more below. 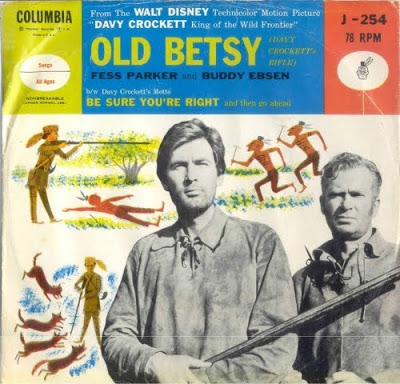 No other gun’s name is as famous as Davy Crockett’s “Old Betsy,” and no other gun has had so many rifles named after it. So many that one gun writer even wrote that he hoped he never saw another gun by that name. Crockett named all of his rifles after his favorite sister, Betsy. There is no record, however, of what the young girl thought of having the term “old” added to her name.

Of the three existing rifles attributed to Davy Crockett, his first rifle has the best provenance, followed by his Philadelphia presentation rifle, which he named “Pretty Betsy,” and the rifle at the Alamo museum.

It was 1803 and young Davy was just 17 when he acquired it. As he put it, “I had by this time got to be very fond of the rifle and had bought a capitol one. I most generally carried her wherever I went, and though I had got back to the old Quaker to live, who was a most particular man, I would sometimes slip out and attend shooting matches where they shoot for beef.”

He described one of these thus, “Just now I heard of a shooting match in the neighborhood right between where I lived and my girl’s house; and I determined to kill two birds with one stone, and go to the shooting match first and then go and see her. I therefore made the Quaker believe that I was going to hunt for deer, as there were pretty plenty about in those parts; but, instead of hunting them, I went straight to the shooting match where I joined in with a partner, and we put in several shots for the beef. I was mighty lucky, and when the match was over I had won the whole beef. This was on a Saturday, and my success had put me in the finest humor in the world. So I sold my part of the beef for five dollars in the real grit.”

This rifle was a top-of-the-line model that appears to have been made in York County, Pennsylvania, of a type that falls between 1780 and 1800. This particular example was made in 1792. The German gun-makers centered in Lancaster and York, Pennsylvania, were the ones that started with the classic German jaeger rifle and developed and perfected the long rifle for the conditions in the New World. The final form was as much a work of art as a weapon featuring delicate lines, swamped barrels, relief carving and the lithe grace of a ballerina. This beautiful, .488 caliber example weighs in at 10.1 pounds and has seven-groove rifling. It has a swamped barrel that has been shortened 2 inches at some point in the past, leaving it with a 60-inch overall length. At 14 inches, the length of pull is unusually long for these guns. This would be quite welcome, for Crockett was tall.

Crockett’s death in the heroic defense of the Alamo established his place forever in American history. Robert Jenkins Onderdonk’s painting “The Fall of the Alamo” depicts Davy Crockett swinging his rifle at Mexican troops who have breached the south gate of the mission.

This classic Pennsylvania rifle, of the finest quality, did not come cheaply. Crockett was making about $6.67 per month, and a gun like this went for $18—quite a financial sacrifice, but a wise one because a rifle was your ticket to survival on the frontier and scrimping on it was narrowing your chances of living. The rifle was often the only really nice thing a pioneer owned, and the only possession he could really take pride in. Davy Crockett was always a man of ambition determined to make the most of himself. He knew the statement a fine gun made about its owner. In those days, quality in the gun reflected quality in the man.

When Davy decided to marry Polly Finley in 1806, he traded this fine rifle and at least 3 months’ work back to the man that he had bought it from in exchange for a low-priced horse worth about $50. This “courting horse,” the first horse he had ever had, established him as a viable farmer, for now he had something to plow with. After he and Polly were married, they rented a farm and put that horse to work.

At the time of the marriage, Davy had a rifle he named “Long Bess” made by Colonel Henry Bradford. Bradford was not only an excellent gunsmith, but he was also the justice of the peace that performed the marriage ceremony for the Crocketts.

Crockett went on to use other rifles, but this first rifle established his reputation as a marksman and began his fame. Its sacrifice even helped procure him the great love of his life, Polly Finley, who bore him children. Despite its short tenure as his gun, its contribution to his life and legend was enormous.

After Davy parted with it, Old Betsy remained in the same county throughout the 19th century as a local celebrity that was regularly exhibited, with its transfers well documented. When the current owners, Joe and Art Swann, bought it in 1978, it was in need of serious repairs, being broken through at the lock mortise and missing the lock and a portion of the forend where the ramrod channel enters the last pipe. The gun was turned over to Herschel House of Morgantown, Kentucky, for restoration in 1980. He did a masterful job replacing the missing lock with one of the correct Germanic types for this rifle, rejoining the stock at the lock mortise and adding the missing section to the forend with such perfectly matching grain to the wood that it is almost impossible to see the repair.

The barrel and the stock flow gracefully and seamlessly into the action. The set triggers contributed to the fine shooting for which Old Betsy and Davy Crockett were famous.

Restoration like this is vital for the preservation of historical objects because condition often dictates how much importance is attached to preserving an object, no matter how significant its history. One only has to spend time at the European museums, with their concentration on gold-embellished nobleman’s weapons, to the exclusion of the day-to-day weapons that history was actually written with, to see the importance of eye appeal to a museum curator. Too many damaged pieces of great historical interest have been junked over the years because of their incomplete, damaged and poor condition. Joe Swann’s commissioning the restoration of Old Betsy was the best thing he could have done to ensure it’s long-term survival. Joe is a leading Davy Crockett historian and a fine gentleman who Davy would be proud to see taking such good care of his first rifle.

Old Betsy’s elegantly sculpted stock, with its patchbox, is typical of the best Pennsylvania/Kentucky rifles of the period.

In 1988, gun-maker Houston Morris decided to make an exact handmade replica of Old Betsy as she would have been when new. Over 100 photographs and 108 hours of study and mechanical drawings later, he was ready to start. The results were so good that the gun was the cover story of the January 1989 issue of Muzzle Blasts, the National Muzzleloading Rifle Association’s magazine.

Source: gunsoftheoldwest.com
Posted by Fess Parker Fans & Friends at 12:07 AM No comments: